The ruling is the result of a tutelary action filed by the black and indigenous communities of the Atrato, organized within the FISCH, ASOCBA, COCOMACIA and COCOMOPOCA as their ethnic authorities and social organizations, and legally represented by the organization Tierra Digna.

They sought to protect the fundamental rights that had been violated by the environmental deterioration of the watershed, which was being caused by the intensive and illegal exploitation of mining and forest resources, and the improper implementation of a basic sanitation system. The Court declared more than 30 state entities responsible for the violation of these rights, due to their omission or undue action in the fulfillment of their functions.
‍
Download the sentence here!
‍

WHAT IS RULING T-622 ANSWERING TO?

The sentence is the result of a tutelary action filed by the black and indigenous communities of the Atrato, represented by the ethnic authorities and social organizations. It seeks to protect the fundamental rights violated by the environmental deterioration of the watershed, the intensive and illegal exploitation of mining and forestry resources, and the improper implementation of an adequate basic sanitation system. The Court declared more than 30 state entities responsible for the violation of these rights, due to their omission or negligence in the fulfillment of their functions.

The Court affirmed that the Atrato holds an invaluable natural wealth for the country and the world, and recognized that this biodiversity exists thanks to the ethnic communities that through their cultures have taken care of the territory, enriched it and evolved with it. In other words, it recognized the interdependence between the ethnic peoples of the Atrato and its territory. For this reason, it ordered the protection of their biocultural rights, the rights of the communities to administer their territories and the natural resources that exist in them in a collective and responsible manner.

To recognize the Atrato River, its basin and its tributaries as an entity subject to the rights of protection, conservation, maintenance and restoration. To form the Guardian Commission between a delegate of the State and one of the riparian communities to exercise legal representation of the river. It will be accompanied by an Advisory Team.

Formulate and implement an action plan to decontaminate the Atrato River Basin and its tributaries, the riparian territories, recover their ecosystems, and avoid additional damage to the environment in the region.

Responsible parties: Ministries of the Environment, Finance and Defense, Codechocó, Corpourabá, Governments and Municipalities. With technical support from: Instituto Humboldt, U. Antioquia, U. Cartagena, IIAP, WWF and other national or international organizations. In conjunction with the communities.

FFormulate and implement a joint action plan to neutralize and definitively eradicate illegal mining activities in the Atrato and other tributaries of the Chocó.

To formulate and implement a comprehensive action plan to recover traditional forms of subsistence and food, within the framework of the concept of ethno-development, which will ensure food security.

Carry out toxicological and epidemiological studies of the Atrato and its communities, in order to: determine the degree of contamination by mercury and other toxic substances, determine possible effects on the health of the population, and structure baseline environmental indicators

Form the Intersectoral Commission for Chocó (CICH) to implement the recommendations contained in Resolution 064 of 2014 of the Ombudsman's Office, which declared an environmental and humanitarian crisis in Chocó.

Ensure sufficient and timely resources to fulfill orders and achieve sustainability and progressiveness of all measures.

WHO MONITORS COMPLIANCE WITH THE ORDERS?

The Court, through ORDER NINE, designated the Attorney General, the Comptroller General of the Republic and the Ombudsman’s Office, as the entities responsible for verifying compliance with the sentence. These formed the Follow-up Committee.

The Committee functions with the accompaniment of a Panel of Experts, composed of various universities, research centers, NGOs and other actors with experience in the issues of the ruling. This committee receives information from the petitioning entities and submits periodic reports to the Constitutional Court and the Court of Cundinamarca.

Architecture, groups and monitoring of T-622 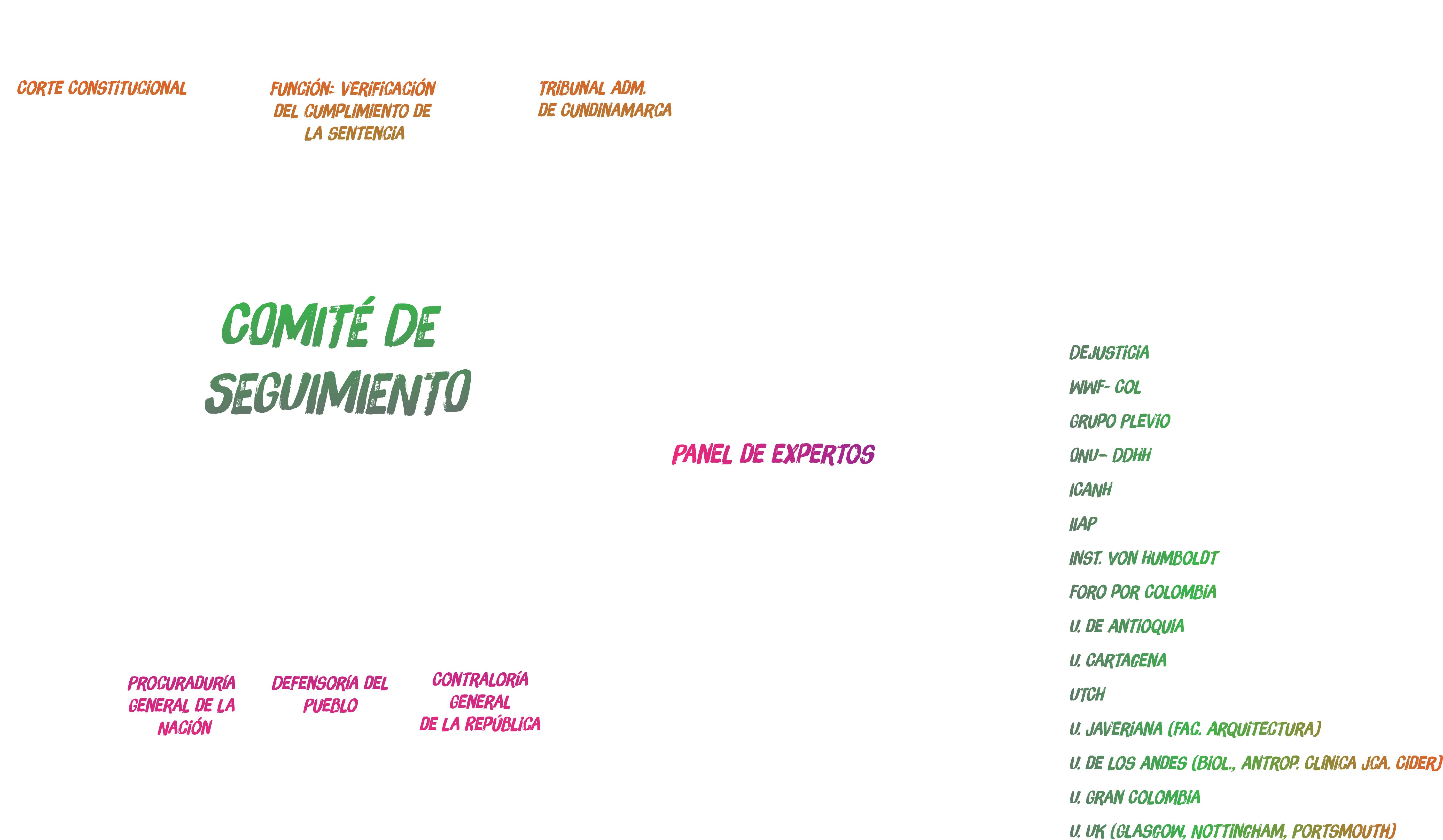 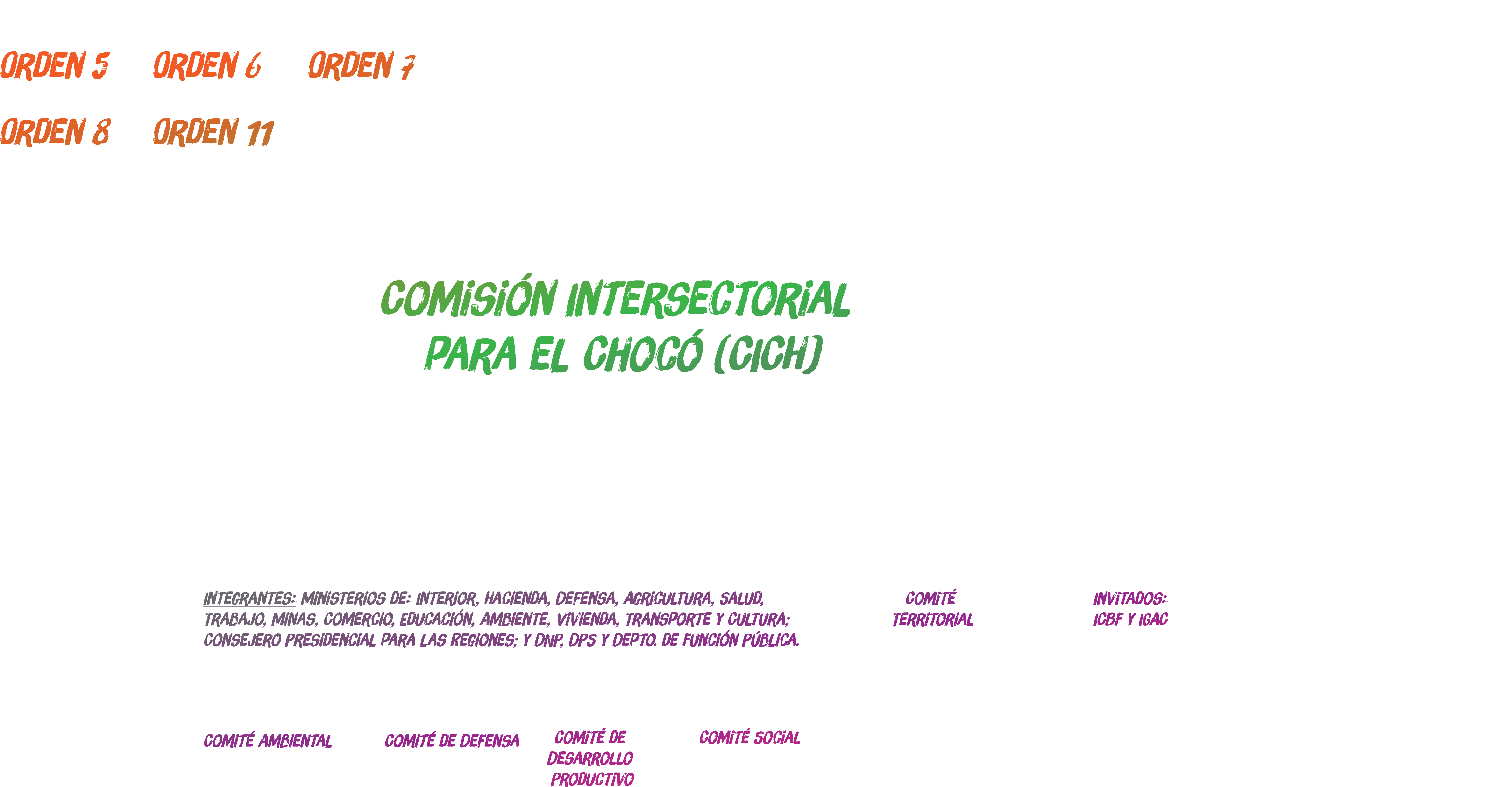 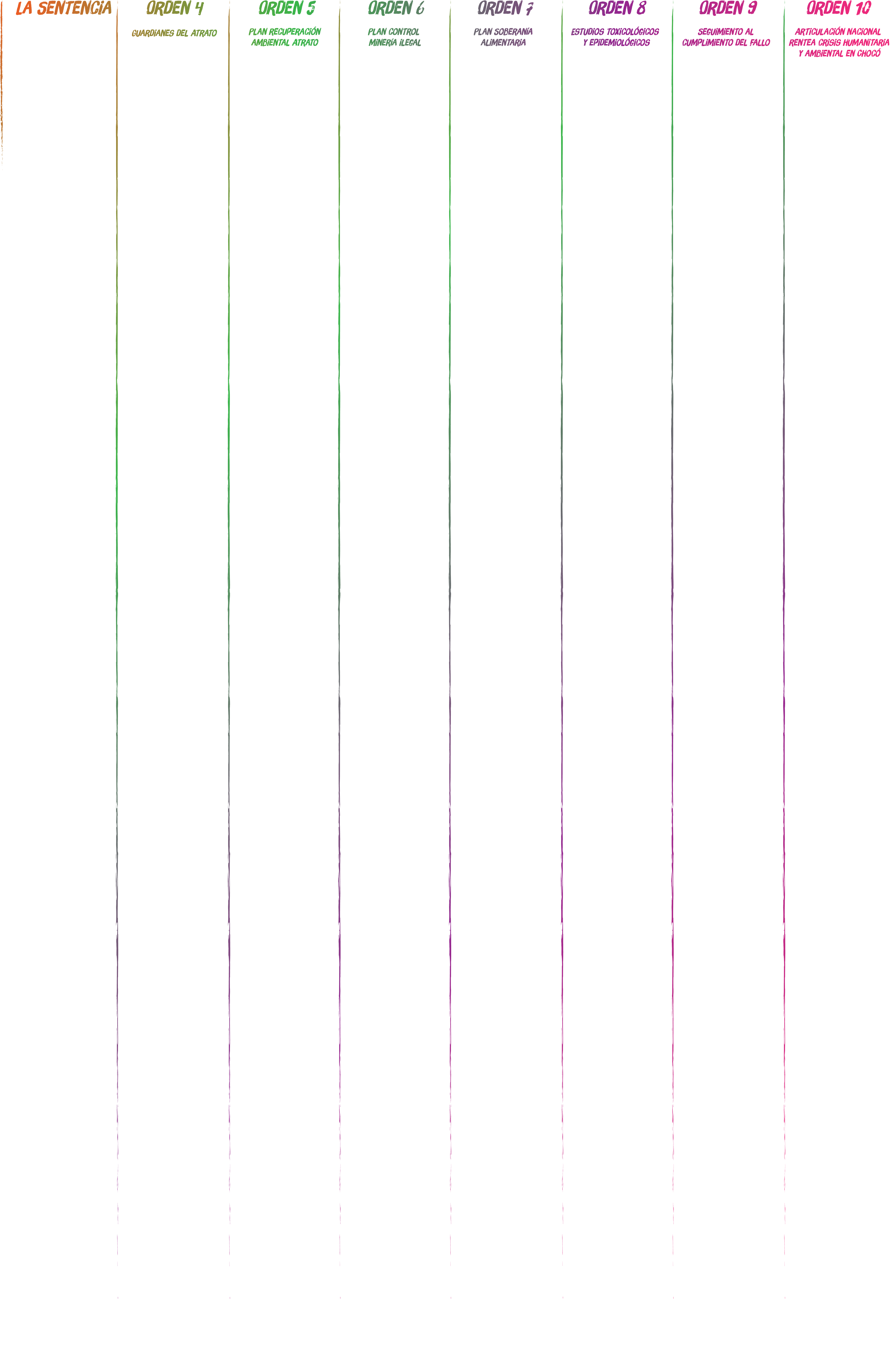